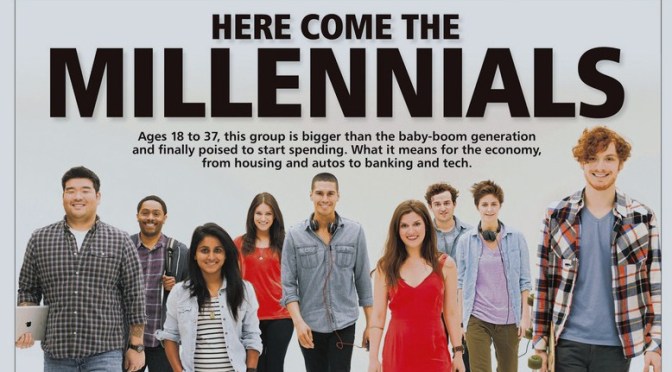 “My cultural background is slightly different,  am not that crazy into social media and feel I politically lean differently than many of my peers” were some of my thoughts that raced through my mind before I took the quiz on PewResearch.com. And behold-91 out of 100. I am much more of a millennial than I thought, even though I grew up in a different culture. This made me realize how Millennials are much more connected and much more aware of society worldwide, making them prepared to deal with the challenges that the U.S. and the world faces.

24% of Millennials believe technology use as being the most defining aspect of our generation. Beyond our incredible love for gadgets, Apple (I’m looking at you, Apple and Mike Daisey), and social media-what does this actually mean for us?

My argument is that due to access to technology, Millennials are a generation in which heightened awareness over all issues will allow a much more powerful direct response to the issues of our country and world. Having access to technology in this context means having access to more resources: not financial information, but knowledge about the status of the world and about each other through social media.  The thirst for knowledge is readily apparent, especially considering how we are one of the most educated generations of all time.

Social class is another concept that I believe is crucial to our generation.  During out time, economic disparity is widening in the United States and worldwide. This fact is becoming even much more visible after 2008 when the economy was deeply affected. The middle and lower class were the ones to bear the brunt of the depression. Young, indebted adults just coming out of college had to suffer from the economic downturn as entry level jobs became harder and harder to find.  However, the enhanced communication, through social media and access to information has made the younger generation more aware of the disparities.

Occupy Wall Street is only one event that proves how the younger generation is starting to react to national and global situations.

Even the rapidly swaying political leanings of Millenials is proof that our generation is one that is less partisan and more adaptable. While Millennials are on the whole much more liberal than other generations, rapid shifts in public opinions have occurred (10% change in Republican vs Democrat voting preference in only 1 year).

The ever-growing access communication is also a reason to why I believe the Millennial generation is a much more global generation. I was very much surprised on how the issues from the video on the Gen-we.com website that primarily targets U.S. residents are so similar to what we are facing in Romania, a country halfway across the globe.

The fact that our generation is well educated and is able to effectively organize is perhaps one of the reasons of why the satisfaction gap between generations is so wide. Perhaps the Millennials as a whole, think that they have the means to enact change in our society. From that confidence then stems optimism on the direction of our society.